Statuettes of the White Gods

In my White Gods post from three years ago, I included the photograph below, which shows ceramic vessels from the ancient Peruvian Moche culture (100 AD to 800 AD) that depict four obviously Caucasoid men with beards. (Note that Amerindians don’t have beards.)

Below is another ceramic vessel from the Moche culture, which portrays a European man with white skin and red hair, mustache, and goatee. The man is depicted as a prisoner bound with ropes.

The pottery of the Nazca culture (100 BC to 800 AD) depicts some people who are obviously European, some who are obviously Amerindian, and some who look like Mestizos. Below are some of the pieces of Nazca pottery that depict Europeans, with European skin color and facial features. 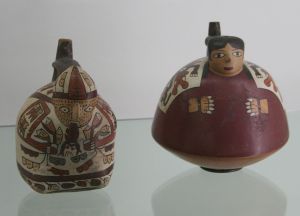 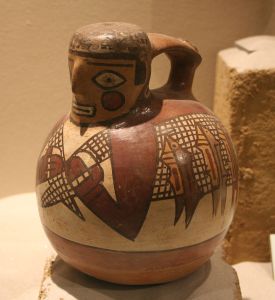 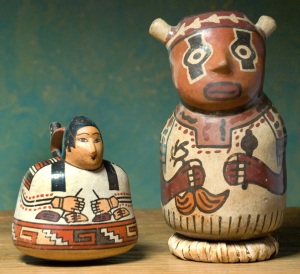 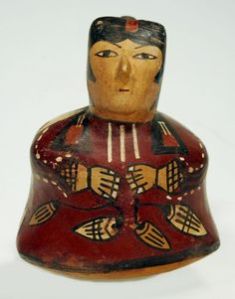 The piece below depicts an apparent Mestizo holding the head of a European female.

The next piece depicts an Amerindian fisherman, with dark reddish-brown skin and black hair.

Below is a piece that depicts an act of miscegenation between an Amerindian man and a European woman. 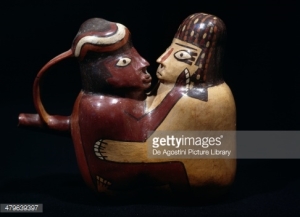 And next is a ceramic vessel in the form of a tattooed European man, from the Ica culture (900 AD to 1500 AD), which succeeded the Nazca culture in the southern coastal region of Peru.

Pieces of artwork depicting Europeans have been found that date back to the very beginnings of pre-Columbian American civilization. As I noted in my White Gods post, the first civilization in the Americas was the Norte Chico civilization of Peru, which began around 3700–3500 BC and ended around 1800 BC. The largest city of the Norte Chico civilization was Caral, which was inhabited between 2600 and 2000 BC. As the photographs below show, Caral had some of the most advanced architecture on Earth at the time, including extremely complex pyramids and circular amphitheaters. 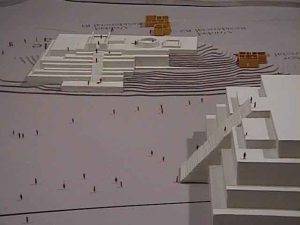 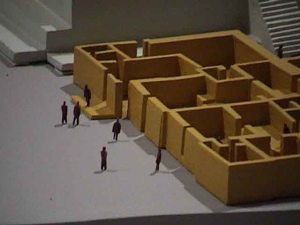 Below are some of the clay figurines that were found a few years ago at Norte Chico sites.

The most important examples of these kinds of sculptures were recently found at the coastal Norte Chico city of Vichama, parts of which are shown below.

In June of last year, reed baskets were found in one of the buildings at Vichama, which contained three statuettes, as shown below. 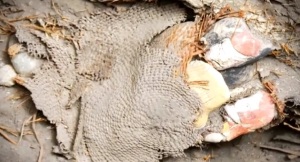 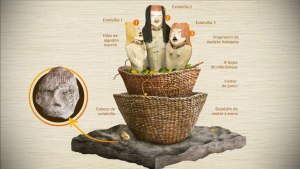 Below are the statuettes themselves, which were dated to 1800 BC. The female statuette in the center was said to represent a priestess, and the male statuette on the left and the female statuette on the right were said to represent political authorities. It’s also possible, however, that the three people depicted were regarded as gods by the inhabitants of Vichama. The bodies of all three of the figures have a color like that of European skin. The male figure on the left has blond hair. The female figure on the right has red hair. The female figure in the middle has black hair and red freckles on her face. 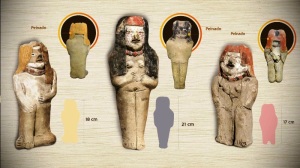 As shown in the next image, in another building at Vichama two clay female heads were found wrapped in cloth and covered with yellow, blue, and orange feathers.

The two heads are shown below.

The same blond and red hair seen on the above statuettes from America’s first civilization can be seen on human remains from ancient Peru, as I will now show.

The next image is plate 35 from Thor Heyerdahl’s 1952 work American Indians in the Pacific. Figure 1 shows a pre-Inca Peruvian head with fine, wavy dark blond hair.

And below is another scan of figure 1 from plate 35.

Next is plate 36 from American Indians in the Pacific. Figure 3 is a head with fine, wavy blond hair from the Paracas culture (1200–800 BC to 100 BC), which preceded the Nazca culture in the southern coastal region of Peru. Figures 1, 7, 9, and 12 also show examples of blond or dark blond hair from pre-Inca Peru.

And below is a larger scan of the Paracas head in figure 3 from plate 36. Note also the narrow-faced European, non-Amerindian morphology of the skull.

The next image shows a Paracas mummy with blond hair and white skin. Here again, the cranial morphology is distinctly European and not Amerindian.

Below is a mummy of a child with fine, wavy blond hair from the Nazca area. 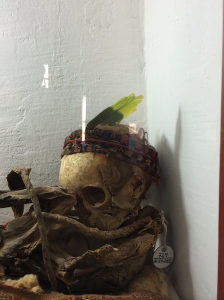 And here is a close-up of the child’s blond hair: 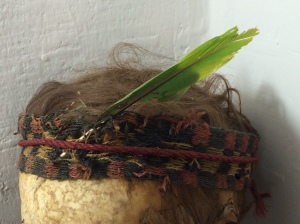 According to this page, five blond mummies were found during the dictatorship of the left-wing Peruvian general Juan Velasco Alvarado (1968–1975), and Alvarado ordered these mummies to be destroyed.

On this page of this website I found the below photograph of another skull from the Paracas culture with blond hair.

The page also shows the next photograph of an obviously European Peruvian mummy head with white skin and light brown hair and beard. The following photograph shows the same head as it is now displayed in a museum in Ica, Peru, after the hair and skin were artificially and fraudulently darkened to make the head look more Amerindian.

The chronicler and conquistador Pedro Pizarro, cousin of Francisco Pizarro, wrote the following about the Incas in his 1571 work Relation of the discovery and conquest of the kingdoms of Peru:

The people of this kingdom of Peru were white, swarthy in color, and among them the Lords and Ladies were whiter than Spaniards. I saw in this land an Indian woman and a child who would not stand out among white blonds. These people [of the upper class] say that they were the children of the idols.

Below is an ancient Peruvian mummy with red hair. This is the same mummy that the liars at New Scientist magazine claimed to have “long black hair” on this page.

Next is a photograph of a Chachapoya skull with red or reddish-brown hair from the Laguna de los Cóndores site.

And the next photograph is of a head from the Nazca culture with red or reddish-brown hair, white skin, and European facial features.

Below is a mummy of a Peruvian child with fine red or reddish-brown hair from around 1334 AD.

Next is another mummy of a child with fine red hair from Paramonga, a city of the Chimu culture (1100 AD to 1470 AD), which succeeded the Moche culture in the northern coastal region of Peru.

Below is a mummy with fine, wavy red hair from the Wari culture (500 AD to 1000 AD), which was contemporaneous with the Tiwanaku culture further south.

One of the first people from Spain to see the ruins of the capital city of the Wari culture was Pedro Cieza de León, and in the first part of his 1553 work Chronicle of Peru, he wrote the following about the people who built the city:

The largest river near the city is called Viñaque, near which there are some great and very ancient edifices, which are now in ruins, but appear to have stood for many ages. When the Indians are asked who built these ancient monuments, they reply that a bearded and white people like ourselves were the builders, who came to these parts many ages before the Incas began to reign, and formed a settlement here.

And finally, below are mummies with fine, wavy red hair from the Nazca culture’s Chauchilla Cemetery, which was established around 200 AD and used for 600 to 700 years. 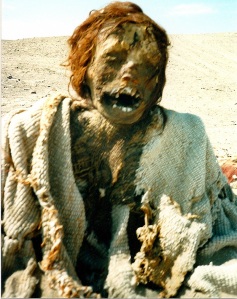 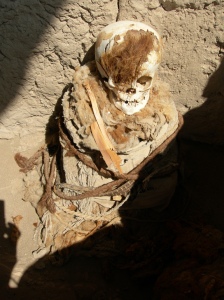 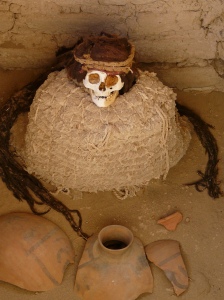 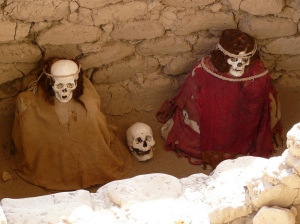 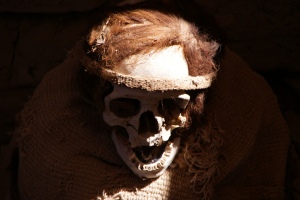 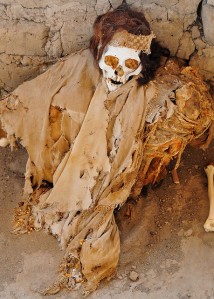 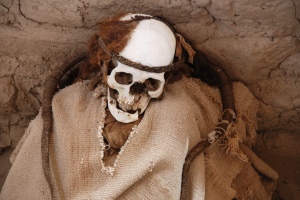 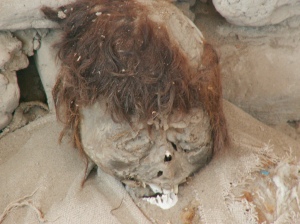 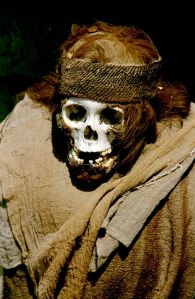 5 comments on “Statuettes of the White Gods”