At the bottom of this post is a plot for a K = 14 admixture analysis that includes three genomes from ancient Egypt. The table above the plot gives some information for these samples.

Among the other ancient samples, the ancient Egyptian samples are most similar to the Bronze Age samples from Jordan in the Levant. Note that the Pre-Ptolemaic samples JK2134 and JK2911 belong to the same J1a2a2-Z2324 and J2b1-PF7314 Y haplogroups that the Bronze Age Levant samples I1705 and I1730 belong to.

Among the modern samples, the ancient Egyptian samples are most similar to the Saudi and Yemenite Jew samples.

These results are hardly surprising, as it has been well understood since the early 19th century, based on the cranial morphology of Egyptian mummies, the hair of Egyptian mummies, and also on the ancient Egyptians’ artistic representations of themselves, that they were predominately Caucasoid rather than Negroid. For example, on page 19 of Samuel George Morton’s 1844 work Crania Ægyptiaca, there’s a table showing that of 100 ancient Egyptian crania, 84 of them belong to different types of unmixed Caucasoids. On the next page, he gives the following quote from an earlier study of ancient Egyptian crania performed by Georges Cuvier (1769–1832):

I have examined in Paris, and in the various collections of Europe, more than fifty heads of mummies, and not one amongst them presented the characters of the Negro or Hottentot.

For ancient Egyptians’ depictions of themselves, see the following two images, which are from murals illustrating the Book of Gates in the tomb of pharaoh Seti I, who ruled Egypt from 1290 to 1279 BC. The first image shows, from left to right, four Libyans, a Nubian, a Semite, and an Egyptian. The second image shows, from bottom to top and from left to right, Horus, four Egyptians, four Semites, four Nubians, and four Libyans. The Nubians are clearly Negroid, while the Egyptians are clearly Caucasoid. The Libyans look more like modern Northern Europeans than modern Northwest Africans.

The three ancient Egyptian genomes leave important questions unanswered. Since they’re from middle-class people, one such question is how the ancient Egyptian elite might have differed from the rest of the population genetically.

This 2012 paper presented Y-STR data for the pharaoh Ramesses III, who ruled from 1186 to 1155 BC. The authors used Whit Athey’s haplogroup predictor to predict that Ramesses III belonged to the Negroid haplogroup E1b1a, which was the cause of much jubilation among Afrocentrists. But this thread casts doubt on the correctness of the Y-STR data, and, in any case, I’ve analyzed the data with the newer NevGen haplogroup predictor, which uses a more sophisticated methodology than Athey’s predictor, and it determined that Ramesses III belonged to the Caucasoid haplogroup E1b1b, with a 97.3% probability. This result makes a lot more sense, because as the below images show, neither paintings of Ramesses III nor his mummy show any Negroid features. 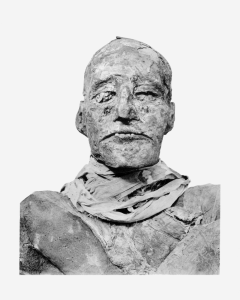 The most important question to be answered is how the ancient Egyptian civilization originated. In the early 1900s the English Egyptologist Sir William Flinders Petrie developed the Dynastic Race theory of the civilization’s origins, and it was the dominant mainstream theory until the late 1960s, when it, like so many other good ideas, became a politically incorrect taboo subject. According to this theory, the Egyptian civilization was founded by people from the Uruk period (4000–3100 BC) of southern Mesopotamia, who sailed in reed boats through the Persian Gulf, around the Arabian Peninsula, and up the Red Sea, and who then moved west over land into the Nile valley, where they introduced the arts of civilization, including writing, and established the first pharaonic dynasty.

Part of what led Petrie to his theory is the appearance of clear Mesopotamian influences in Egypt’s Naqada II period (3500–3200 BC) which were absent in the preceding Naqada I period (4400–3500 BC). These influences include architectural styles, pottery styles, cylinder seals, artwork, and rock and tomb paintings depicting Mesopotamian-style boats, symbols, and figures. You can read this page and this page for an overview of the Dynastic Race theory. The second page discusses the Mesopotamian influences of the two predynastic Egyptian artifacts shown below. The first is the ivory handle of the Gebel el-Arak knife, dated to the Naqada II period. Depicted at the top of the back side of the handle is a man (the “Master of Animals”) wearing Mesopotamian clothing flanked by two upright lions. The second artifact is the Narmer Palette, dated to the Naqada III period (3200–3000 BC, also known as the Protodynastic period or Dynasty 0). It is thought to depict the unification of Upper and Lower Egypt by Narmer, the first pharaoh of Egypt. The back side of the palette shows two serpopards with their necks intertwined. Below the photograph of the Narmer Palette is a photograph of a cylinder seal from the Uruk period of Mesopotamia, showing a very similar serpopard design. 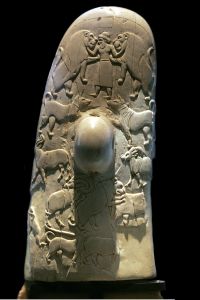 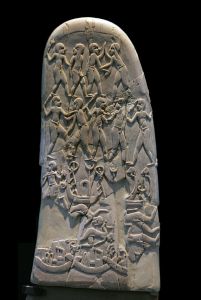 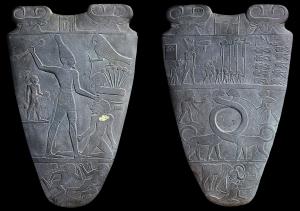 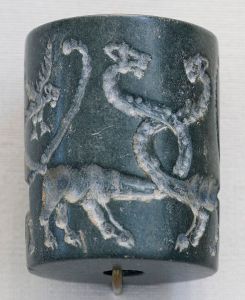 The other major piece of evidence that led Petrie to his theory is that the people of the Naqada I and Naqada II cultures were distinctly different in both their burial styles and in the physical types of their remains. An important paper on the craniometry of these remains is “The Dynastic Race in Egypt” by Douglas Derry, published in 1956. Below are two excerpts from this paper:

The Predynastic people are seen to have had narrow skulls with a height measurement exceeding the breadth, a condition common also in negroes. The reverse is the case in the Dynastic Race, who not only had broader skulls but the height of these skulls, while exceeding that in the Predynastic Race, is still less than the breadth. This implies a greater cranial capacity and of course a larger brain in the invading people.

It is also very suggestive of the presence of a dominant race, perhaps relatively few in numbers but greatly exceeding the original inhabitants in intelligence; a race which brought into Egypt the knowledge of building in stone, of sculpture, painting, reliefs, and above all writing; hence the enormous jump from the primitive Predynastic Egyptian to the advanced civilization of the Old Empire.

In 1977–78 Thor Heyerdahl and his crew sailed the Tigris, a Mesopotamian-style reed boat like those depicted in Naqada II period Egyptian rock paintings, from the Persian Gulf to Pakistan, and then to the Red Sea, to demonstrate the possibility of seaborne contact between the Mesopotamian, Indus Valley, and Egyptian civilizations. Below is a photograph of the Tigris, and a map showing its voyage. 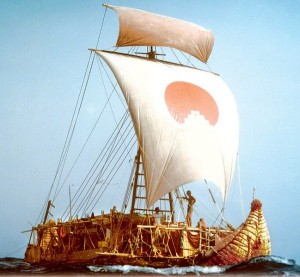 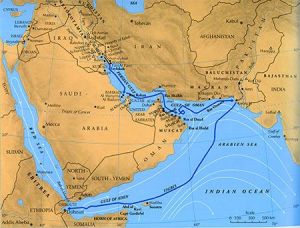